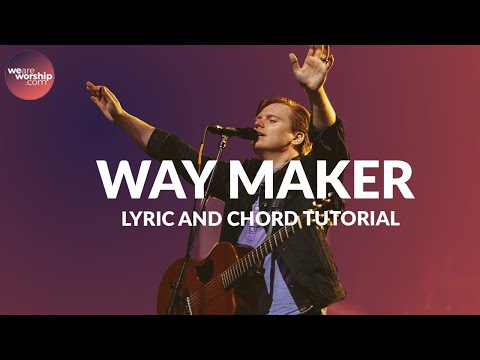 Way Maker was originally written and recorded by Nigerian gospel artist Sinach back in 2015. By March 2019, the video for the song had racked up over 100 million views on YouTube, making her the first Nigerian gospel singer to achieve this. In 2019, US based Michael W Smith and Leeland recorded their own versions of the song, and since then, it has gone on to be covered and released by artists such as Bethel, Passion and Jeremy Riddle to name but a few, and is being sung in the local church all across the world.

Sinach said the song was written as she was going through her own struggles, and that ‘when the Lord gave me that song, He said “I’m your way maker, I’m your promise keeper”, which was a personal revelation to me.’ She said the song has taught her that you can never out-do God, and that when you believe Him for who he says He is, that He will do what He said he will.

Here at WeAreWorship, we’ve got all your needs covered with transposable sheet music and chord charts to help you lead Way Maker, and proclaim that those truths wherever you are!